Hi Dudes, Blog 43 is here and its staring down the clueless government and saying “No Pay Rise for NHS staff… really? I think the Eton educated dummies have misread the room. We will not be messed around any longer.

WE KNOW OUR WORTH.

NHS PAY – Wow, we’ve had some crazy reaction to our recent Facebook posts regarding all our Housekeepers, Porters, Ward Clerks, Dental workers, Physio’s, Secretary’s, Health Cares, Lab Workers, Estates staff, Nurses, ODPs, Occupational Therapists, Security staff, Phlebotomists etc, being excluded from the public sector pay rise – We posted a video with some very dodgy camera work which has had 4 thousand views. That’s 4 thousand potential local allies in this fight! The staffs staring on the video have even been offered some cinema work on the back of their glamorous appearances!! after all Cineworld are always looking for ushers and pick ‘n’ mix operatives.

We are delighted for our brothers and sisters in other public services that they have received some acknowledgment, but to be excluded!! …. all you guys didn’t do much during the peak corona crisis did you? You don’t deserve a reward do you?

“But you have agreed a 3 year pay deal?” I hear the right wing cynic yell – Well I think the contract and environment has changed since then my anonymous heckler.

Well our national officers in a perfect world would thrash out a deal with a reasonable government who recognise your commitments and sacrifice… “a reasonable government“ there’s the stumbling block. This collection of spivs, cheats, and liars are unlikely to play ball. So again what do we do? What do you do if negotiations fall apart?

A strongly worded letter? A petition? A march in London? Some Facebook memes with sad faces?  Maybe – some of these things are useful, and fun. Or….  Do you want your union to use its industrial power of collective action if we are ignored? Do we speak with one United voice and demand this government recognises us? Do we accept that sometimes we need to use our only real power and take direct action if absolutely necessary? The feedback we have had from you in the last few days is just that. You want us to fight.

What can you do in the meantime and whilst negotiations are occurring? Keep an eye on our Facebook page for updates. Get involved with your Branch – we always welcome new activists to help in anyway big or small. Next and, crucially, and most boringly UPDATE your details. The easiest way for any action to fail is if we cannot contact you by post (silly Tory union laws) if you have moved house, moved departments, changed phone numbers / email since you became a member, you need to let us know… unison.sjuh@nhs.net 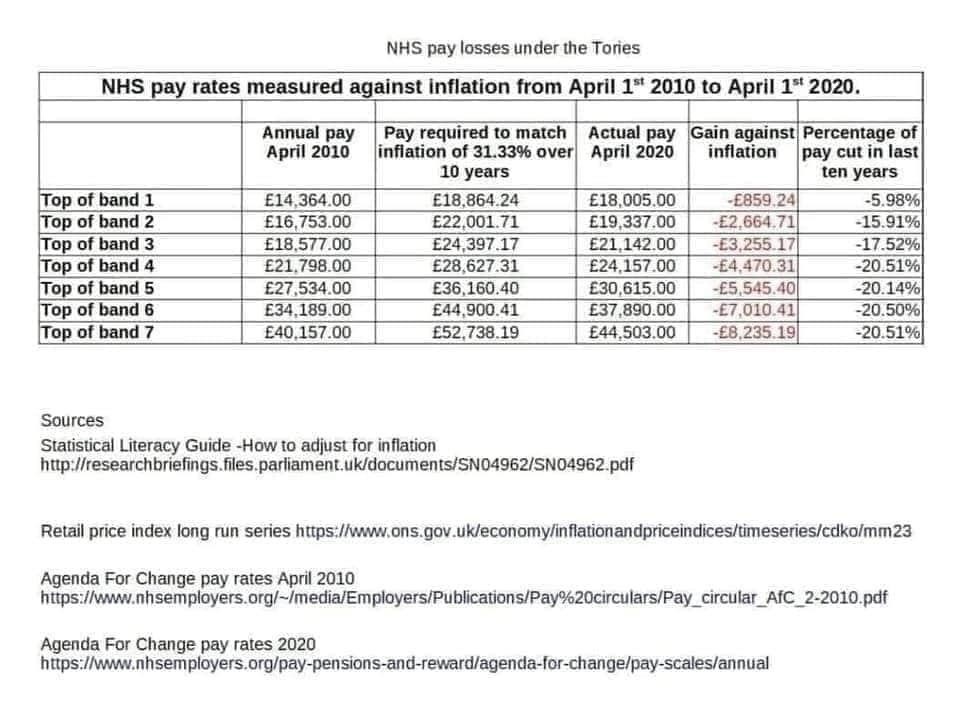 A collection of wonderful M.P’s have put together the following Motion to put to the House of Commons – That this House recognises the extraordinary commitment and sacrifice of NHS staff throughout the covid-19 outbreak; believes that the depth of public gratitude for this work must now be reflected in what the Government does next for NHS staff; notes that as it stands, NHS staff must wait until 2021 for their next pay rise despite having gone above and beyond during the covid-19 outbreak; recognises the importance of improving pay to tackle the vacancies that exist across all parts of the NHS workforce; and calls on the Government to show its support for the NHS by turning warm words and applause into a firm commitment to bring forward NHS pay talks and to fund an early and meaningful pay rise.

If all our members could contact their M.P demanding they support this Motion  it could make a real difference. For details on contacting your local M.P follow this link https://www.theyworkforyou.com/ “

Within the Union we will be looking to express the strength of feeling to our own negotiators. This pay round is different. You feel differently – We hear this. Our negotiators need to hear this. A potential internal motion could look like this? What do you think?

This Branch recognises the enormous contribution made by public sector workers during the Covid 19 Pandemic.

Healthcare workers mostly on Agenda for Change terms and conditions have not had a substantial pay rise for over 10 years. With inflation taken into account, many are 20% worse off in real terms now than they were a decade ago.

Our current pay deal, due to run until 2021 does not reverse this trend.

During the pandemic, healthcare workers have proven our real worth. We are indispensable to society, yet we are chronically low paid.

This branch agrees to

-Start preparing members to ballot for industrial action if pay demands are not met.

We call on our union to

This is just a draft but if our members demand that YOUR Branch follows this direction. TELL US – We are member led.

From the Trades Union Congress….

Trade unions always try to resolve disputes through negotiation. But when that doesn’t work, industrial action may be needed as a last resort.

The industrial action you probably hear most about is going on strike. But there are other actions workers can take, such as picketing, go-slows, overtime bans and work to rule. Lockouts by employers also count as industrial action.

In addition, strikes involving workers who provide what the government calls an “important public service” can only be lawful if at least 40% of the workers balloted over the action vote in favour of it.

As long as industrial action meets the strict requirements set by the law, the union and its officials are protected from most forms of legal action, and employees have some protection against dismissal. But your employer is entitled to refuse pay for the duration of your strike action, even if it’s lawful.

Workers who take part in unofficial industrial action or ‘wildcat strikes’ are not protected from dismissal.

We use cookies on our website to ensure you find the information you need in the simplest way. By continuing to use our website you are consenting to their use. Find out more about cookies and how we use them.